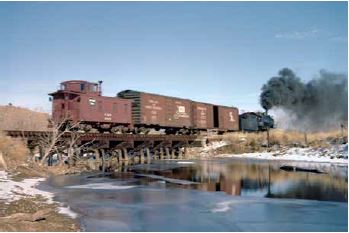 The bright red caboose we have in the museum, Colorado and Southern #10583, was built 100 years ago, in July 1919. This railroad was never very profitable, so it choose to build as much of its equipment as it could in its own Rice Yard coach shop, the 10583 being one of 10 in that series. The C&S standard gauge main line ran from Wendover, Wyoming, south to Texline, Texas, with only a few short branches in between. So it is likely it spent the majority of its life in Colorado, running along the Front Range.

Back then cabooses were assigned to a specific crew, or more correctly a specific conductor. That meant they would be assigned on a train for a crew district which was usually about 100 miles long. When the crew arrived at their destination, so did their caboose, and it would spend more time waiting for its next run than it did actually on a train.

We can only assume C&S 10583 avoided any severe accidents or other issues that might cut short its service life. Photographic evidence shows it assigned to branch lines in the Fort Collins-Loveland area; it is very likely it visited Greeley and passed by the museum frequently in the ‘50s and ‘60s. It is also known to have spent time on the isolated Climax branch out of Leadville in the early ‘60s. Steam lasted on that line until 1962, and several photos have been published of 10583 by photographers visiting the line to catch the last of standard gauge steam and rotary snowplows in the Rockies.

While the Chicago Burlington and Quincy Railroad owned a good part of the C&S, it had to allow the C&S to operate independently and maintain its own equipment. CB&Q and C&S cabooses may have looked the same, but they wouldn’t be treated the same. Even after the railroad was able to abandon its perennial money-losing narrow gauge system, there was still little money available to retire the older wood cabooses

With the Burlington Northern merger in 1970, and the economic slowdown caused by the gas crisis soon after, time finally caught up with 10583 and its surviving woodbodied mates. It was the only one of the 10 built in 1919 that remained. Sources list 10583 as being retired in September 1973, which is remarkable; given that it served as it was intended, basically unmodified for 64 years. Not bad when you consider that many railroads had covered entirely to steel equipment shortly after 10583 was built.

At this time, a northern Colorado railfan, Al Jackson, decided he wanted a caboose of his own. He had heard that the Colorado and Southern Railway was selling some of their retired cabooses. The city of Denver wanted to redevelop the area where they were stored, and it was feared the railroad would soon burn them to recover the scrap metal that was left.

Al arranged to visit C&S’s Rice Yard in Denver to pick out a caboose for purchase, and ended up paying $500 for 10583. However, he had to hire cranes to load it on a flatbed truck for transport. Originally Al wanted to move it to property in Pingree Park, 50 miles west of Fort Collins; but his truck driver wasn’t keen on that, so the car ended up at Al’s residence in north Loveland. He kept it in his backyard off 57th street for over 25 years. The property was later sold, and the new owner then sold the caboose to our museum, back when it was still the Greeley Freight Station Museum.

When Al and his wife, Phyllis, first started cleaning it out, they found several feet of debris and trash that had to be shoveled and swept out of the car. There were signs of transient campfires. Al’s son, Sean, recalls that it was nasty. But one of the prizes found in that junk was an old-time brake club, used by the train’s brakeman to help set brakes on a train’s cars. Sean, who became a career railroader, still has that. They spent about a year scraping the old paint, and then applied 10 gallons of bright red paint on the exterior, and another 9 gallons of white paint on the inside. Broken windows were rebuilt, and electricity was installed. A pot-belly stove would provide heat. Over the years, Sean, his sister, Melissa, and his brother, Corey, all helped with various caboose projects.

That original shade of red quickly faded to what Sean called a “nasty shade of pink.” So Al, with help from his wife, decided to go with the Tudor type brown to better match the house and also not look so garish for the neighbors. The brown weathered nicely too.